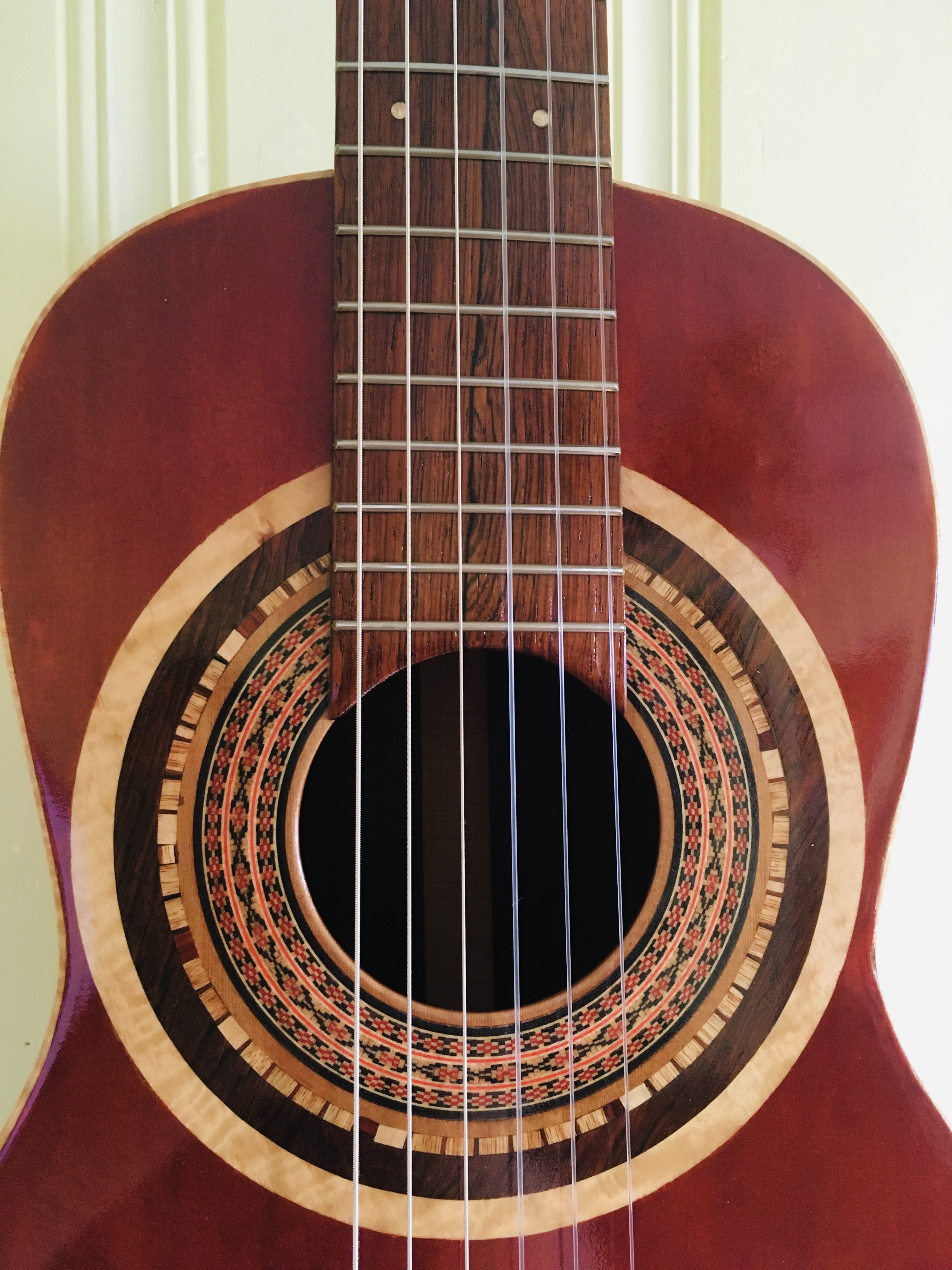 For this instrument, I decided to make a guitar in the style of an 1840s Martin. In those days, there was a lady named Madame de Goni who toured around the United States playing music on a guitar that would have been the size and shape of the instrument I present very proudly to the world today. Thus, I’ve developed a tendency to refer to it as the DeGoni guitar (or the Madame de Goni guitar).

The vision of this guitar began forming back in the spring of this year (2021). I purchased a beautiful book, Inventing the American Guitar, to add to my ever-growing library of luthier and woodworking related reference materials. I’m particularly fond of the craftsmanship of earlier times and this book has a plethora of images demonstrating instruments that are nothing less than works of art and what some might justifiably call lutherie porn. Nearly two-thirds of the way into the chronological display of how the modern guitar evolved from the romantic era Spanish-American guitar, there is an entire chapter dedicated to the story of Madame DeGoni. I fell in love immediately and months later I’m happy to present the guitar I might have made for the touring charmer if I had be asked to do so.

C.F. Martin made a special guitar for Madame De Goni and it was not the typical Spanish fan-bracing soundboard but a prototype for what would turn into the famous (and some say revolutionary) x-bracing soundboard reinforcement which was codified by the 1850s and is used to this very day!

The famed poet Henry Wadsworth Longfellow attended a house concert in Boston, Massachusettes in 1842. In two different letters he wrote days later it is obvious that the lady from Spain charmed his auditory as well as his visual tickle spots:

I really made the best attempt I could to make this guitar feel and look like it was snatched up during a time travel drive by of the 1840s. I went so far as to give the finish the appearance of an antique guitar that had been retouched and refinished through the years. I really had a lot of fun with this one.

This De Goni tribute is made by simply the best wood possible. I’m pretty sure I could not be any more fortunate than I currently am with the wood I have at my disposal. For the soundboard, classical guitars are overwhelmingly made using either spruce or western red cedar. In the spring of this year, I acquired a collection of wood that has me set up with the finest tonewood which I can use to make guitars for the rest of my life, most likely. A local luthier named Wade Lowe passed away earlier in the year and I was indeed a fortunate soul, one of the few chosen to view his immaculate collection of wood his family was selling that he built for himself as a luthier and woodworker.

For sale now at Village Music in downtown Avondale Estates in Decatur, Georgia.