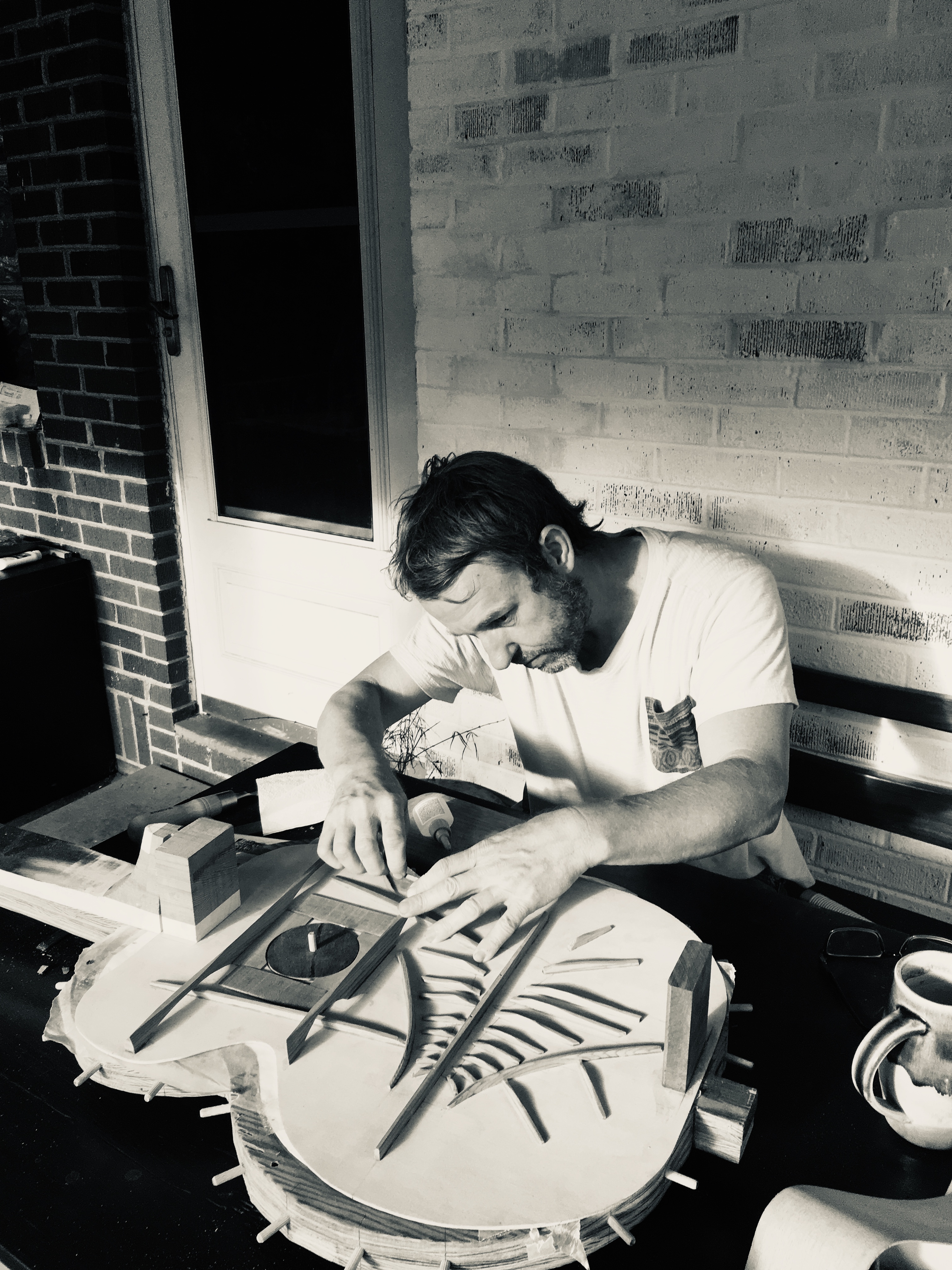 This article is about my experience building my first guitar bridge. In the pics, you’ll be able to see the steps for this process in some notes I took from the book “Classical Guitar Making: Tradition and Technology” by Cumpiano and Natelson. In addition to the normal bridge making, I’ve had to do some modification because….for this guitar I have made the soundboard bracing in the style of Dr. Michael Kasha. Follow the link to an interesting article about him.

The first thing a luthier must do when doing this sort of bracing is to establish the location of the guitar’s bridge. Since I had no experience making bridges, I thought I’d just make the “base” of what could be called a Kasha bridge and that I’d later simply attach a factory built bridge on top of this base. This guitar has been sort of a prototype and thus I’ve taken an unorthodox approach on just about everything. To complicate matters on finishing this guitar, there is nobody out there making “Kasha bridges” (using quotations marks as I don’t even know what to call them). That should give a clear indication of how rare these guitars are! So, I’ve had to invent this whole approach. As I’ve made it through this process and now know the fundamentals of bridge construction, on the next guitar I will obviously be able to make my own “Kasha bridge” as a single piece. When I do that, I’ll post another article detailing those steps. If you are reading this and want to purchase a Kasha bridge made by me, let’s talk.

If this is your first time to my site….I’ll begin by explaining that I’m building guitars with classical specs but with a nuanced flair that more appeals to the jazzy-blues chord melody fingerpicking aficionados (all 10 of us). So, while my guitars are not “classical” in the orthodox school of classical guitar lutherie, and they are not strictly “jazz crossovers” with cutaways in the body to maximize playing in the higher frets, etc., they are like an offspring of these body styles. So, I’m calling them clazzical for the purpose of this article. Jazzical sounds too, ….I don’t know.

The bridge on an acoustic guitar, one could argue, is the most important element in a guitar’s sound. Always take care that it will not be the source of any energy loss, is one luthier’s main objective in approach to design whose opinion I respect. The bridge serves as a conduit to and distributes the strings tension onto the soundboard. I had my mind blown the first time I read it explained this way: the strings do not make the noise you hear when someone plays the instrument. The bridge converts the strings’ energy and sends the vibration to the soundboard, which disperses those vibrations. Indeed, the flexibility of the wood selected and mass determine how that energy is converted and dispersed. So, there’s a reason why the guy at the guitar store tells you “Yeah, man this guitar is spruce top, Indian rosewood sides and back with a mahogany neck.” You could make the guitar out of all pine, or pallet wood, but it would not be a great sounding instrument no matter how crafty the hand-craftsman is. Later on, I’ll write an article about tone woods. Back to the topic of bridges converting vibration from strings and sending that energy to the soundboard. Some luthiers with considerable experience are adept at removing bridge mass (after the guitar is strung) to fine tune the sound of the instrument.